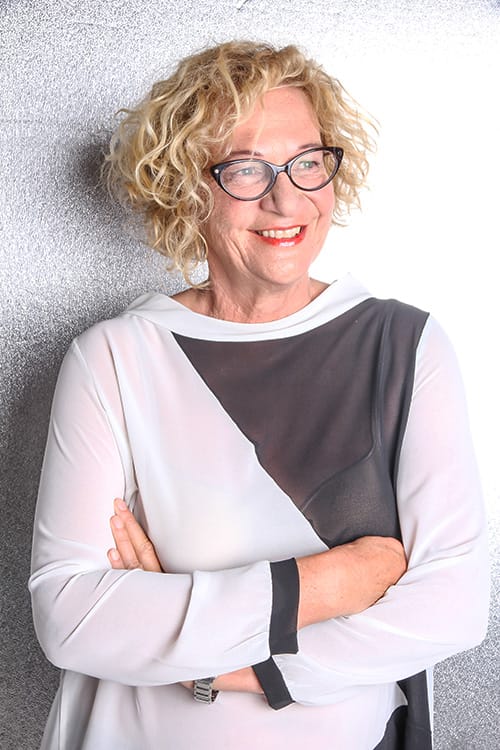 Irna obtains an honours degree in Afrikaans and Dutch literature at the University of Stellenbosch in 1978 after being a participant in her third year in D.J. Opperman’s literary laboratory group. In 1979 she completes an honours degree in Journalism under Prof Piet Cillié, also at Stellenbosch. Thereafter, in December 1979, she commences her career as reporter at Die Burger in Cape Town.

In 1981 she is awarded the Stellenbosch Farmers’ Winery’s prize for enterprising journalism under pressure of time and circumstance, following her coverage of the recent flooding disaster in Laingsburg and specifically Montague.

In 1985 she becomes Die Burger’s first female chief sub editor and in 1988 editor of De Kat in Johannesburg.

Her collection of short stories Grootmensspeletjies (Grown ups’ Games) is published in 1995.

She parts ways with De Kat in 1996 to move back to Cape Town and is a founding member of New Media Publishing in 1998 along with colleagues John Psillos, Naomi Herselman and Sheldon Cohen. Shortly thereafter she also becomes editor of Insig and between 2007 and 2009 of Boeke-Insig.

In April 2015 she steps down as Editorial Director of New Media to focus fulltime on creative writing.

She is awarded in 2015 by Media24 with the Piet Cillié award in recognition of her career in journalism and, also in 2015, by Naspers with the Order of Table Mountain for her contribution as business woman to the Naspers group.

Irna’s first crime novel, Moordvis, and its English counterpart Dead in the Water is published by Penguin in July 2016.

In March 2018 her second crime novel, Death Cup, is published.